As children, my sister Jeanette and I would regularly entertain our friends wrapping our legs behind ours ears, though at the time, the word “yoga” was completely unknown to me. We very much liked to mimic Michael Jackson’s mesmerizing moves as well (remember the break-dance?). It was only when, in 2000, I was pregnant that I attended a yoga class for mums-to-be. I found the class boring, New Age kind of a thing, and never went back to that center. A few years later, I attended a more vigorous yoga class. It was a revelation, I felt like I was six years old again; not as flexible as I had been then, but still as blissfully happy. The practice made me high, I was in love! A few months into the class, I noticed that my chronic lower back pain had disappeared . 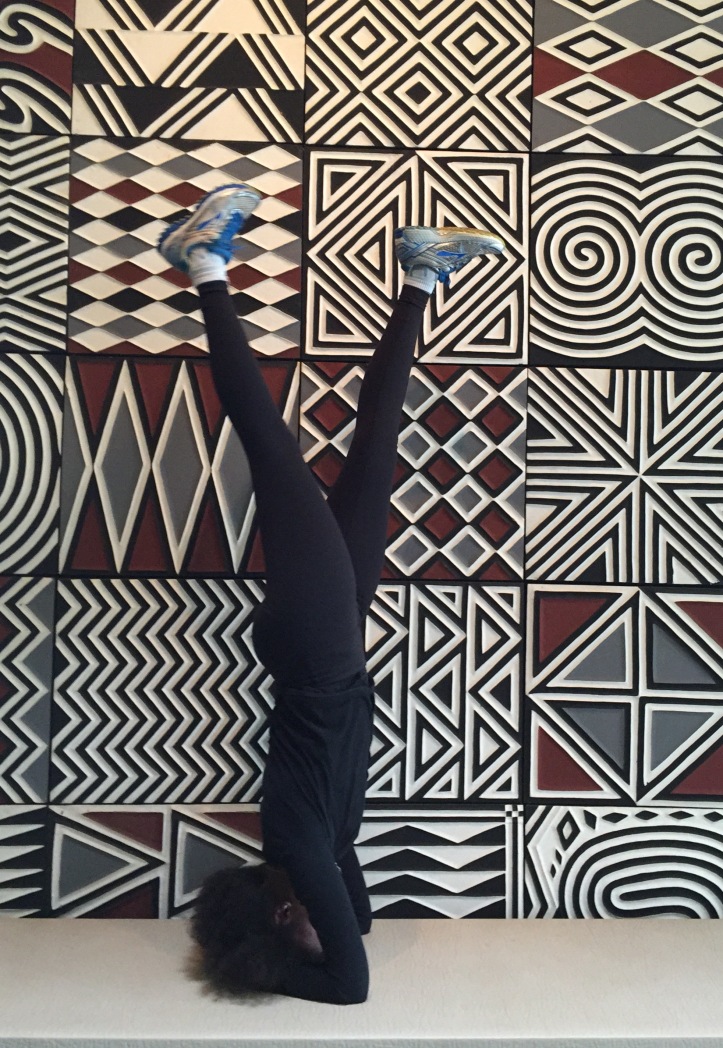 I am an avid reader, so whenever I come across something that triggers my passion to learn more about it, I raid libraries and bookstores. Amazon says that the book “Yoga and Vegetarianism[1]” by Sharon Gannon was first delivered the first week of September 2009 (31 August – 9 September).

As a child, I had never taken any pleasure in eating animals and drinking milk. A story runs in my family about how my sister and I refused to eat fish saying that that whole grilled fish was “dead and staring at us”.  I cannot myself remember ever saying that, but I do recall how I always loved observing ants and being fearful that I might kill them inadvertently while walking. And so, it is perhaps not all that surprising that reading “Yoga and Vegetarianism” turned me vegan overnight.

Both my paternal grandparents were lifelong vegetarian centenarians. My grandmother – who we affectionately called Jjajja (‘grandma’ in Luganda, one of Uganda’s main languages) – was the smartest and most generous woman I’ve ever known. She used to claim she could identify meat-eaters from a distance. Jjajja despised fat people and above all lazy people. And she adored her grandchildren, who she found absolutely perfect, even – or especially – the picky eater little me.

I guess it is because of her and our special relationship that my not eating meat as a child was never a problem in our family. But, from their perspective, the most difficult to accept was my disgust with and refusal to drink milk. Worse, still, my sense of smell was very strong and my gag reflex was overwhelming at times; I could never stand the smell of fresh cooking milk (done as a way of pasteurizing it) invading the whole house whenever fresh milk arrived straight from the farm. My sister could blackmail me into doing almost anything she wanted by threatening to dip her buttered toast into her morning tea. My mother too devised all manner of diplomatic excuses beforehand for my anticipated refusal to drink the milk I was offered wherever we went (almost everywhere), while at home she did her best to keep butter out of my food.

All Rwandans, particularly the Tutsi pastoralists, consider cows to be sacred and their milk the most perfect nourishment on earth, especially for kids. But the culture around cows goes well beyond their practical benefit. People are given cows’ names; telling a woman that she has a calf’s eyes is the highest form of complimenting her on how beautiful her eyes are. Similarly, the shades of human skin colour are often described in analogy with cows’ skin-colours, and traditional dances mimic cows’ gait, with women’s arms raised to look like and to move gracefully – like cows’ horns, as feet stamp rhythmically to drums and song. Traditionally, a cow has always been regarded as the most generous of gifts, offered only on special occasions, or as the highest mark of gratitude and friendship. Thus, in this cultural context, not liking milk let alone rejecting it outright, and worse, openly saying so, was considered a severe anomaly.

Nevertheless, over the years, as a teenager and a young adult, I ended up eating certain sorts of cheese (those without the buttery smell), chicken and fish. But “my side stories” about the private lives of ants and the dead people on my plate were there; ready to resurface at any moment. Even when I had given up on chicken, I was an on-and-off unhappy vegetarian. Reading “Yoga and Vegetarianism” was such a relief and a validation from the first words of the book. Sharon Gannon dedicated her book to:

«To those who want to be free

To those who do not want to be hurt by others

To those who do not want to live in poverty

To those who are sick but want to get well

To those who want to know the purpose of their lives.»

The clarity of Sharon Gannon’s message literally brought me back together and opened me to greater compassion for all beings (but first brought me greater awareness of my own prior ignorance).

According to the psychologist Melanie Joy “In one week, more farmed animals are killed than the total number of people killed in all wars throughout history.” But how did it all begin? Why does this total insanity continue? Why does it not make the world’s headlines?

I did ask myself these very same questions in 1994, when my people were being slaughtered in their hundreds of thousands in broad daylight in Rwanda; even as the overwhelming rest of the world went on with its business in total indifference. I concluded then, that human beings are simply the most violent animals on the planet, and that compassion is, perhaps, one of the rarest qualities of our species.

Many researchers agree that the advent of agriculture and the domestication of animals was a terrible moment in history. This is what Jeffrey Masson writes about it: “The domestication of plants was accompanied by the domestication of animals. They happened more or less simultaneously. Except for dogs, who were domesticated much earlier, the earliest animals to be domesticated were sheep, goats, pigs, and cows (from around 9000 B.C.E.). Obviously, the original point of animal domestication had to do with food. And of course, to eat animals, humans had to exclude the recognition that they had feelings and could suffer in much the same way we do.” He continues: “People in early indigenous cultures (Inuit, Aboriginal, Amerindian, Maori, and so on) asked forgiveness of an animal before they hunted it down and killed it. Killing may have been necessary, but it was not casual.”

It is worth noting that the terms, “stock market” and “capital” all derive from this herding culture where wealth was in livestock. The Latin root word for capital is capita, which means the head of a cow, goat, or sheep (the first animals to be domesticated). The exploitation of animals seems to have served as a template for capitalism as we know it today. Tracing slavery back to its beginnings, David Brion Davis[3] (one of the world’s most prominent slavery historian) links it to the domestication of wild animals

So where do we start?

Whether we agree with Masson and Davis or not, we live in a time of global crisis.

In 2006, a UN report[4] identified livestock as the leading human contributing cause of climate change. Studies[5] and reports abound on the imperative to cut down animal products in order to mitigate climate change. As a species, we are collectively slowly facing the truth about animal industries – a topic that is generally hidden from our view.

The website http://www.killedsofar.com counts how many animals worldwide are killed for food. By the time I put the final point to this article, it counts 35 billions so far this year and 629 billions if we include marine life.

Many things have informed my views about food, animals and humans. I became vegan for ethical reasons and reflecting on my own relationship to other beings (not just other human beings) is a work in progress.

Eating a plant-based diet is the easiest, cheapest, and smartest thing that we, human beings, can do for our health, the planet, and the other animals.

Everyone, I believe, is trying to do his or her best. Among the many hats I wear, I am a yoga teacher as well as the mother of a thriving 14-year-old who has been a vegetarian since his birth. In the first capacity, my role is to provide education so that people will be more informed and make their own choices from a basis of knowledge rather than ignorance.

Over the years, I have seen a growing number of people becoming more interested in knowing exactly what was in their food; how everything in it was produced, and the impact of such eating choices on our living environment. My husband comes from a family of hunters, and for him, giving up on red meat and dairy products was a personal milestone. He has watched and recorded dozens of documentaries on animal rights and our vital environment. Thanks to his deep understanding of the stakes, our home is a vegan household.

With my son, we pride ourselves on making the most delicious vegan chocolate cake and pancakes.

For my husband, it was important to find tasty meat substitutes. And all I can tell you is that the spicy tempeh[6] has never failed as a crowd-pleaser. Did I mention my mom was an incredible cook and a true foodie? Any cooking skills I have are from years of assisting her and being spoiled by my auntie who always sent me cookbooks for my birthday.

Learning how to veganize your favorite dish and/or to find a good substitute to dairy products if you’re hooked on them is a game changer.

Genuine knowledge originates in direct experience. If you are already considering becoming vegetarian or vegan, you only need to get started*. Don’t delay action, don’t overthink it. Some people prefer to set up meat-free days or to take a vegan pledge for a week or a month (there are many online support groups[7]). Make sure you set doable goals and even better idea,  get a friend to do it with you. The more, the merrier!

I can’t wait to hear from you.

Jeanine (I insta food pics too )

[1] Yoga and Vegetarianism, The Diet of Enlightenment by Sharon Gannon

[2] This is the title of a major book by Jim Mason: An Unnatural Order, The Roots of Our Destruction of Nature

[3] Inhuman Bondage: The Rise and Fall of Slavery in the New World by David Brion Davis

[5] From the World Economic Forum: https://www.weforum.org/agenda/2015/06/why-eating-less-meat-is-the-best-way-to-tackle-climate-change/